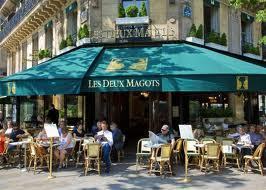 “As I ate the oysters with their strong taste of the sea and their faint metallic taste that the cold white wine washed away, leaving only the sea taste and the succulent texture, and as I drank their cold liquid from each shell and washed it down with the crisp taste of the wine, I lost the empty feeling and began to be happy and to make plans. . .

With so many trees in the city, you could see the spring coming each day until a night of warm wind would bring it suddenly in one morning. Sometimes the heavy cold rains would beat it back so that it would seem that it would never come and that you were losing a season out of your life. This was the only truly sad time in Paris because it was unnatural. You expected to be sad in the fall. Part of you died each year when the leaves fell from the trees and their branches were bare against the wind and the cold, wintry light. But you knew there would always be the spring, as you knew the river would flow again after it was frozen. When the cold rains kept on and killed the spring, it was as though a young person had died for no reason.

In those days, though, the spring always came finally but it was frightening that it had nearly failed.”
- Ernest Hemingway, A MOVEABLE FEAST

After travels from Holland by way of the Rhine and up into the Alps of Switzerland, I experienced what Ernest Hemingway described when he said, “By then I knew that everything good and bad left an emptiness when it stopped. But if it was bad, the emptiness filled up by itself. If it was good you could only fill it by finding something better.” A wealth of deep thinking - new tapestries of symbolism - spilled over into my dreams. The richness of mingled languages, Dutch, German, French, and Swiss, murmured in my ears. To settle before sleep I read Ernest Hemingway's "A Moveable Feast," the restored version. Hemingway's sons, Patrick and Sean, contributed extensive introductory notes to the original chapters left by Ernest in this never-completed memoir of his early years in Paris.

Hemingway described the life of an ex-pat in rich detail and as quoted above, paints a moment when the lingering melancholy of a late spring anchors the bold and unfamiliar. Vivid recollections need "to be made, not described," Hemingway stated. He writes with clean observation, attentive to distinct and simple elements...oysters with their strong taste of the sea and their faint metallic taste that the cold white wine washed away.

Reading "A Moveable Feast," I tumbled into another time and place. Hemingway's essays on his artistic struggles to write his first novel, his appreciation of raw nature, stories of less innocent, darkly-undertoned friendships, and the details of the uncertain but stable domestic routine upon which he built life with Hadley and "Mr. Bumby," his young son, came alive on the page. Closing the book, I fell to thinking about what makes both the strangeness of new experience and what is deeply familiar penetrate our consciousness. Why do we travel, and why do we always then make "home away from home"?

“Never to go on trips with anyone you do not love,” Hemingway noted after a convoluted, unsettling journey to Lyon with fellow writer and friend, F. Scott Fitzgerald. Travel highlights companions who are compatible with us by their nature as well as those for whom the burdens of a journey unleash additional friction and underscore hidden, rough-edged dissimilarities. I appreciated anew the genial nature of my fellow travelers on the Rhine even as Hemingway found solace within Sylvia Beach's "lending library" on the Left Bank and in the welcome aperitifs in the salon of Gertrude Stein. The places our minds and souls take comfort equally open us to companionship.

Hemingway writes his way into deeper understanding, opening himself to the journey, to what simply is. His words mark truth like the swift charcoal outline a painter draws to anchor a picture. Reflecting back on the loves and friendships of his Paris years, Hemingway concluded, "You belong to me and all Paris belongs to me and I belong to this notebook and this pencil.”
Read More
Be the first to comment 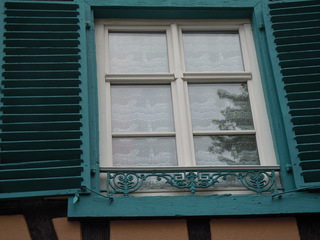 MY MOTHER'S NOVEL
by Marge Piercy

Married academic woman ten
years younger holding that microphone
like a bazooka, forgive
me that I do some number of things
that you fantasize but frame
impossible. Understand:
I am my mother's daughter,
a small woman of large longings.

Energy hurled through her
confined and fierce as in a wind
tunnel. Born to a mean
harried poverty crosshatched
by spidery fears and fitfully
lit by the explosions
of politics, she married her way
at length into solid working-class:
a box of house, a car she could
not drive, a TV set kept turned
to the blare of football,
terrifying power tools, used wall
to wall carpeting protected
by scatter rugs.

Out of backyard posies
permitted to fringe
the proud hanky lawn
her imagination hummed
and made honey,
occasionally exploding
in mad queen swarms.

I am her only novel.
The plot is melodramatic,
hot lovers leap out of
thickets, it makes you cry
a lot, in between the revolutionary
heroics and making good
home-cooked soup.
Understand: I am my mother's
novel daughter: I
have my duty to perform.

Marge Piercy included this poem in her book of poetry, "The Moon is Always Female," first published in 1984. I felt the ethos of her words in my bones, thinking of my own mother who desperately wanted to major in Forensic Science in the early 1950s, only to be told women were not allowed in the field and shunted into sociology. I think about my mother, top of her university class academically, working two secretarial jobs for male bosses possessing half her intelligence for a quarter of their wages. I think of my mother wanting so much more than her world would yield up; how she struggled for a foothold, demanding of me I carry that fierce hunger and hard work and do better. Hit harder with the chisel and crack a few more walls.

I can't claim that I was able to do this with my life. Not in a way that encompasses grand change. But in my daughter's life I have seen change that matters. And so I think it goes. For mothers and daughters, fathers and sons. We crack doors more ajar with each generation, heart and shoulder to wood. Seek more, demand more. We may ourselves settle for less, but with hope the next set of shoulders will carry the day. And in time, I believe this is true.

On this Father's Day, as Mother's Day, let us celebrate the work of generations. Acknowledge the sacrifices of grandparents and parents - flags on the masts of a new generations of ships that set sail with rich cargos of more than fresh ambition. As Marge Piercy writes so eloquently, we are each someone's novel. The work-in-progress of a grand and daring world-building that began early in Grandma's kitchen, or Dad's garage, in the warmth of Mom's home-made soup.

I offer gratitude for these daring works of imagination.
Read More
Be the first to comment

The Dissonance of Change

Every morning
the world
is created.
Under the orange

of summer lilies.
If it is your nature
to be happy
you will swim away along the soft trails

for hours, your imagination
alighting everywhere.
And if your spirit
carries within it

each pond with its blazing lilies
is a prayer heard and answered
lavishly,
every morning,

I have just spent the last six days in the company of my daughter, a new MD, on a cross-country drive from Seattle to Cleveland - where she will begin her surgical residency training. The interesting thing about road trips is that changes in life circumstances - the process of shift - are richly reflected in passing landscapes. The pitch and roll of mountain ranges and valleys, the changing color of dirt and rivers, vistas opening to prairie then to lakes, the populating of wilderness by farms, and those wide, cultivated acres narrowing to industry, cities rising upon concrete overpasses, the towering downtown skyscrapers... These are all echoes of personal relocation.

All we travel through echoes what we feel inside the midst of great shift. One known thing gives way to a new and unfamiliar thing. The translation between experiences gaps. We stand, stranger in a strange land, "grokking" as Heinlein would have it, the essence of all that looms before us. There is real dissonance in change. We thrill to the adventure and call of new challenges and stimuli: and we step back, trembling at the edge of our comfort zone. The new world is both attractive and unsettling at the same time.

Yes, we grow when we adapt and challenge ourselves to conquering unknown circumstances. But we also experience a poignant sense of loss stepping away from our established lives. The known is familiar, perhaps even beloved; the past represents the most grounded we have felt in recent memory. What lies ahead is a question, and the potential to fail, to find life wanting, or severely disappoint ourselves is achingly real.

Arriving in Cleveland entailed a profound geographical shift, a cultural shift, and an immersion in learning to navigate on the fly. Nothing is known: not routes nor directions, location of services or grocery stores - not even whether the nod in the elevator is ritually feigned or sincere. Does one say hello or keep a respectful peace? Mistakes abound. Amusement frequent. Surprise and alarm a daily occurrence. All of this shift: the dissonance of change. What is familiar, surrendering to the strange.

Moving from one part of these United States to another is difficult. The goodbyes to friends, paperwork hoops, proofs of identity and legality, even the establishing of credentials - finances to vehicle licenses - it's all just huge. But here's the fun thing: every step in life that enlarges personal boundaries in fact enlarges the self.

So, hang on little tomato, as Pink Martini sings it, and grow. Let it be in your nature to be happy.