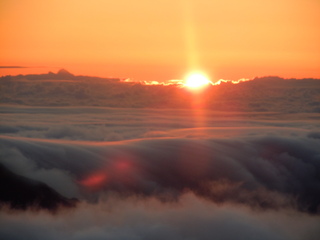 Last Sunday, April 22, 2012, my sweetheart Greg and I drove the long winding road from the seashore on Maui to the 10,023 foot summit of Haleakala Crater. We were on our way to view the sunrise from the rim of the dormant volcanic crater overlooking the gleaming Pacific. To begin our new life together alongside the rise of a new day.

Our wedding entourage met not in flip-flops, summer dresses and Hawaiian shirts, but in fleece and jeans and mittens in the dark hotel parking lot at 3 a.m. The intimate party of six included my daughter from Connecticut (our officiant), my sleepy son (our classical guitarist and photographer), and Greg's eldest son and fiance from Seattle (readers of poetry for our ceremony). We drove inland from the sea to the national park entrance and slowly snaked up to the summit in a string of gathering headlights, white pearls rolling up the side of the black mountain. We reached the top of Haleakala slightly before 5 in the morning: the couple in the back seat climbed out of the rented Town & Country van green at the gills after two hours of stomach-churning switchbacks up to the rim. The volcanic desolation, blasted by wind, was truly cold in the darkness at that altitude. Everything that could be worn was piled on, including a pair of pants tied around someone's head for warmth. Dawn would not be for another hour.

Quietly the parking lot filled - no car engines allowed to run, all vehicle lights off. With a small group of sunrise pilgrims we climbed the stone steps to an observation deck and gazed out over a white sea of roiling cloud beginning to glimmer at the horizon. The horizon turned metallic ruby and then the clouds a fiery red, followed by an explosion of color that illuminated the world from the hot disk of a new sun. Sunrise gilded the vast ocean and touched Haleakala in a bowl of gold. We stood in awe. In a cathedral of such immense natural wonder no one spoke. An instrumental hymn set to an old Scottish tune my son would play later for our ceremony swelled in my thoughts, "Morning Has Broken."

As the crowds dispersed, we followed a short path along the ridge until we found ourselves on a knoll overlooking the islands and clouds below us. We faced our beaming officiant, newly licensed by church and the State of Hawaii. My son uncased his guitar and began to play Bach, blowing on his fingers to thaw them. Grateful for the warming light, Greg and I spoke our vows to one another on the red soft rock of Haleakala, which in Hawaiian means "House of the Sun."

There's more to this story, and bits and pieces will find their way into the blog to amuse you (enter a flinty-eyed female Park Ranger stage left, packing a pistol with an eye on enforcing signage). But we wanted to share with you here our official wedding announcement, submitted to the New York Times Sunday Styles section. With half the family residing in New England and my publishing life out of New York, we had felt very connected to the Sunday Styles readership. Alas not. Our announcement was not printed. Snubbed love. (Thus the Sunday Styles dreams of one middle-aged bride are crushed. All that work to tell our tale in Times Wedding Speak! That strange, formal Town Crier language. Admittedly we were a business day late hitting the six-weeks-in-advance due date. Who knew. Sigh.)

So friends - our wedding announcement is included below. Just for you. Enjoy.

Glenda Burgess and Gregory Scotford Miller were married Sunday at dawn at the edge of Haleakala Crater, Haleakala National Park, on the Island of Maui. Katherine Grunzweig, daughter of the bride, officiated as a member of the Universal Life Church Monastery.

The bride, 55, an author who goes by her professional last name of Burgess and whose most recent work, "The Geography of Love," a memoir, was nominated as a finalist for the 2008 Books for A Better Life Award, met the groom, also 55, an anesthesiologist with Physicians Anesthesia Group of Spokane, Washington, on a blind date set up by mutual friends. The bride, a widow, is keeping her name. She has two children, Katherine Grunzweig, aged 22, a graduate in Art History from Yale University attending the University of Washington Medical School this fall, and David Grunzweig, 21, who attended the US Naval Academy in Annapolis and is continuing his studies in computer science engineering at Massachusetts Institute of Technology in Boston this fall. The bride’s former career was with the U.S. State Department where she began her career as a Presidential Management Fellow, following a stint working for Senator Warren G. Magnuson on the Senate Appropriations Committee. She is a graduate of the University of Washington Evans Graduate School of Public Affairs. Her parents, Mrs. Louise W. Burgess, and Thomas K. Burgess, Lieutenant Colonel, USAF (Retired), both of Washington State, divorced in 1972 and are deceased.

The bridegroom earned his medical degree from the University of Utah, followed by residency and fellowship in North Carolina. Dr. Miller is the author of a monograph on anesthesia techniques for robotic heart surgery. An avid salmon fisherman and outdoorsman, trekking frequently to Alaska and Canada, Dr. Miller grew up in South Dakota where his parents, Dr. and Mrs. Maclynn Miller, still reside. Dr. Miller has three sons. Daniel Miller, 27, a graduate of the University of Washington, is employed in the web/internet industry in Seattle, WA. Matthew Miller, 25, is a third year medical student at the University of Texas, Houston, and Jonathan Miller, 20, is a chemical-biological engineering major at Rice University, also in Houston. Dr. Miller's previous marriage of twenty-five years ended in divorce.

Ms. Burgess met Dr. Miller in June of 2010. They were introduced by married friends, physicians, who knew the couple individually and felt they would be “perfect for one another.” Ms. Burgess had not dated since the death of her husband seven years prior, focused on raising her children and her writing. A blind date, the first for either of them, seemed both intimidating and simultaneously care free. “I mean, why not?” Ms. Burgess laughed. “I’d love to enjoy a meal out and meet someone great to talk to.” As for Dr. Miller, a cyclist, he recalled thinking Ms. Burgess, a runner, was beautiful and fun to be with. “We were both so different and yet we hit it off spectacularly. There was a great deal of chemistry.” After a whirlwind courtship involving a symphony picnic in the park and an autumn trip to New York City to visit with Ms. Burgess’ publisher and attend both the opera and theater, Dr. Miller proposed to Ms. Burgess in their favorite Spokane restaurant, saying at her look of delighted astonishment, “Yes, I’m serious!” As they share the 22nd of the month for their birthdays in September and July, they chose the 22nd as their wedding date.

The wedding ceremony took place outdoors at Haleakala National Park following a spectacular sunrise overlooking Maui and the Pacific Ocean with a view of the surrounding islands. The bride’s son performed Bach on the classical guitar and his mother's favorite hymn, "Morning Has Broken." Daniel Miller and fiancé Becca Allen both read poetry in honor of the couple, and Ms. Burgess followed the couple’s vows with her own poem, written to the groom. After an al fresco breakfast at a local coffee house in the crater valley, the wedding party celebrated that evening with a surfside candlelight dinner. The couple will follow their wedding with a June trip down the Rhine by boat from Amsterdam, and then by train into the Alps, exploring art museums, historical sites, and outdoor recreation. The couple will continue to reside in Spokane, Washington.

Congratulations! What a wonderful way to begin a new chapter of lives that are clearly already rich and wonderful. The sunrise, the music, the intimate group: I can imagine it all, and send so much love. xox

Your open candor and incredible skill of writing gave me such a gift just to read your words......I have read Geography 3 times and cried more and more with each read. Your love and devotion to Ken is still so beautiful to me....I am so happy for you and your new love. God bless you both,

Eric, Thank you. Your words support me in this, maybe the most challenging crux of my life- beginning to ljourney in ove again. Ken died on July 22 - also Greg's birth day. We view this as his presence, and blessing. The continual open door.
Joy to you!