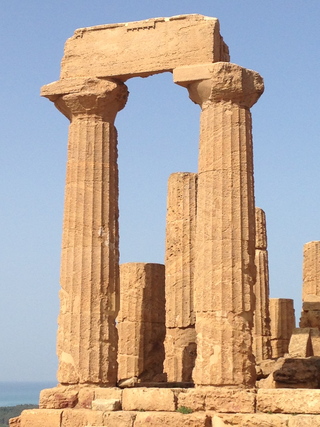 Temple of Hera, Valley of Temples, Agrigento, Sicily
In travel, as in most exertions, timing is everything.
- Paul Theroux, "The Pillars of Hercules"

A good book is the kindest of companions. It accompanies one through airports, ferries and waiting, the inevitable delays and rain, cafes and sleepless nights, sunny shores and sweet mornings, shiny as new pennies. I happened upon such a wondrous book - now dog-eared and creased, pages fat from days of arid hikes followed by sea-going humidity, ably ringed in coffee stains - in the travelogue penned by Paul Theroux, THE PILLARS OF HERCULES (Fawcett Books, 1995).

A prolific and gifted novelist and essayist, Theroux is no stranger to journeys of open-minded discovery. His book was everything I wanted in a book to accompany me on a journey through the middle Mediterranean. A study of ancients: from the Spanish Steps of Rome to Pompeii, skimming the Amalfi Coast, touching Capri, exploring ancient Sicily to at last sail on to that pivot of ancient maritime history, the Island of Malta. A "Grand Tour" (within the given limits of modern work schedules) to explore these ancient shores and empires long gone, the temple remnants that stand alone, washed in watercolor sunsets. Prehistory 3600BC to citizens of Pompeii crouching in tombs of volcanic ash; from the artistic and architectural lineage of Greek and Roman temples to the scintillating hidden waters of the Blue Grotto.

Although it is a fat book, a good three inches, the essays span Theroux's explorations beginning at the mouth of Gibraltar following the northern European shores of the Mediterranean, to return to Gibraltar once more; arriving on the opposite shore via the southern Middle Eastern and North African coast (linking the so-called "Pillars of Hercules"). I debated carrying such heft, considered its burden in my pack. But as I explored these ancient lands some 18 years later than Theroux, I found his observations enabled interesting comparisons. Much had changed in the way of modern conflicts and outlook; yet in the geography itself, and its silent mysteries, not much at all. We still stand in the long shadow of the ancients.

I find it absolutely remarkable to come across a ruin older than I can imagine; to speculate on what the object once stood for, outlasted, represents in the modern context. I find it unspeakably touching, for example, that a nameless prehistoric culture on the Island of Malta constructed, with great deliberation, rolling 1200 pound slabs of stone on round boulders of rock, a stone temple with a view to a distant island framed beautifully between the standing pillars of the main altar. I find it moving, in the simplest of contexts, that these people celebrated what is beautiful, the fecund cycles of the equinox, left behind simple stone necklaces and clay figurines. That wherever humans have been, we build, plant, pray and gather around the hearth, leaving our stories behind.

Theroux is a literary wonder: an encyclopedia of literature and history dovetailed with a cynical yet surprisingly genuine ability to be touched, surprised. He is snarky, witty, and absolutely true to the telling detail that delivers the world in glance. I found him a terrific companion on my own curious travels. A point of reference on both modern context and subjective understanding. I will be sharing my own thoughts on my travels in the next few essays, so if you're curious, stay with me over the summer as I ruminate from a 21st Century perspective on the ancient empires.

Which reminds me to note some of the great books I gathered, many from a nifty travel-oriented bookshop, Longitude Books in Plymouth, Minnesota (www.longtiudebooks.com). If you are venturing out yourself, consider any or all of these terrific reads and references: