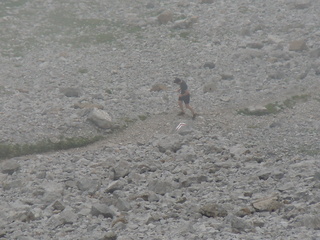 Runner in the clouds. The Jungfrau, The Bernese Alps, Switzerland
At work on the novel in progress at my desk, editing and rewriting from revision notes, I chanced to revisit a post written near the beginning of an earlier project. At that time I faced the challenges of the blank page. Much of that novel was worked out on the trails that cut across the bluff near my house. Three years and a novel later, after laying down several drafts and as many complete revisions on this new writing project, I have the added benefit of two draft reviews from outside readers, each read from different but complementary perspectives.

There are manuscript questions for the writer anchored to grammar, plot, and character distinctions, and there are matters of intent, the art of language, and theme. I deeply appreciate both perspectives. I gleaned the most however from an insightful read by a national book critic. This kind of wholistic review, from a professional who reads widely and with an eye to what makes a book work, proved invaluable in understanding the big picture narrative. And yet, and yet. The final answers are found on the bluff.

Some thoughts from January 2014~

Concerning all acts of initiative (and creation) there is one elementary truth, the ignorance of which kills countless ideas and splendid plans: that the moment one definitely commits oneself, then providence moves too. All sorts of things occur to help one that would not otherwise have occurred. A whole stream of events issues from the decision, raising in one's favour all manner of unforeseen incidents and meetings and material assistance which no man would have dreamed would come his way. I have learned a deep a deep respect for one of Goethe's couplets: 'Whatever you can do, or dream you can, begin it. Boldness has genius, magic, and power in it. Begin now."

This essay by Scottish mountaineer W. H. Murray, collected by Steven Pressfield in a little gem of a creative kick-starter titled, "The War of Art: Break Through the Blocks and Win Your Inner Creative Battles," explores the mystery of the power of commitment. When we choose, we accomplish. When we commit, we begin. We undertake the necessary steps to move forward from intention to deed.

Many poets and writers -- Wordsworth, Whitman, Yeats, and of course Thoreau, Emerson, and Oliver -- understood physical movement as preparation for deep thinking. A preamble to engagement. Walking through hoar-frosted grasses beneath an oyster-colored sky of low cloud this morning, I caught myself problem solving, working a tenacious creative dilemma, unaware my conscious mind had defaulted to autopilot. A floating transparency linked my body and winter and movement through space. Far down the trail I had my problem solved simultaneous with an awareness of a nearby crow, the knowledge hawks actively hunt crows, and appreciation for a grand pine frosted in white, its clustered needles encased in frozen fog.

In running, a calm inner balance rises from the primary focus on breathing and stride. Like meditation, this single and simple focus, running, restructures the overburdened, fragmented mind. As concentration relaxes into a rhythmic groove, we release actively piloting the run. Mental chatter falls to the wayside, big ideas step forward, stress seeps away. On a vigorous extended walk, the rhythmic physical groove finds us sooner, with less effort. The mind leans back, trusting in the body's instinctual balance, and begins to surf the mental intranet. In this state the mind observes, pages through phrases and ideas, and effortlessly connects the random and mysterious. For me, running is a form of mental strength training while a walk is a free-climb.

How does this insight impact productivity habits? I begin with this straightforward question: What is needed? A break or a reboot, inspiration or new thinking? Beginning a work project has multiple entry points, with differing yields. Am I facing distraction? Do I need to open my thinking and push through a creative block? Pace my focus through a long haul effort?

I believe there are patterns within all of us that enhance thought and breath, movement and idea. What works for you?