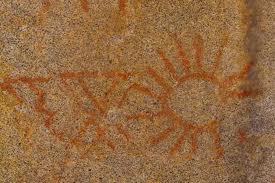 THE NEWS
by Joshua Mehigan

What happened today? Where did it go?
The raindrops dot the window and roll down.
One taps the glass, another, three at a time,
warping the view of black trees limbs and sky.
Long hush, quick crescendo. Wind leans on the sash.
Behind me in the shadows sleep two cats.
Nearby, like something small deposited
tenderly by a big wind on the bed,
my wife sleeps deeply through the afternoon.
The sky is gray. What color is the sky?
Rhinoceros? Volcanic dune? Moon dust?
Breast of mourning dove? Gray butterfly?
Blank newsprint. There's no news, no news at all,
and will be none,
until, at long last, in the other room,
one light comes on, and then another one.

Much of 2017 has unfolded for me as though it were an existential play. We are now somewhere in the middle act. A startled audience, debating amongst ourselves if this violent dramatic arc in world news, and personal local news, is growing exponentially more unreal and negative, or if our minds have simply not yet grasped, This is the way things are now.

I remember childhood conversations with my father as he told me the stories of his father, an army commander, a prisoner of war killed near the end of the second world war. How everyone around him in those days felt confused, dazed by the news of the day. This cannot be real, they said. No, this cannot be real. This falling of nations, these public squares of screaming fascism, plans for calculated genocide, squads of fanatic teenagers, dirt mounded on the unmarked graves of murdered children. An entire planet finally pressed by a horrific enormity of events that "could not be real" to take up arms against the most human of aggressions, power and hatred.

When we walk in the footsteps of the wars across Europe, these ghosts are never far. The wars before, and since. When we turn on the news of the day, the media box foments back at us with rage and hatred and murderous prejudice. Can this be real? Has nothing changed?

I don't have answers. I can't begin to foresee the future for our next generation. The world is rapidly and continuously changing its geography, cultures, and concepts of its own humanity. I sometimes feel as the poet above -- the news of our times is lost in translation. Is hatred a shape? Is that volcanic or stone disbelief? Rose red graves? Or the garden, there, half touched with dew in the midmorning sun.

I listen to the rhythm of the rain; of the dog, breathing heavily, stretched out on his side and asleep by the back porch door. The fast-beating fury of the hummingbird as it plunders the lavender. That unhurried galleon of trailing cloud tilting and slipping across the sky. Rhythms. The half-phrased poems of life. The heartbeat of the world, the word. The news.