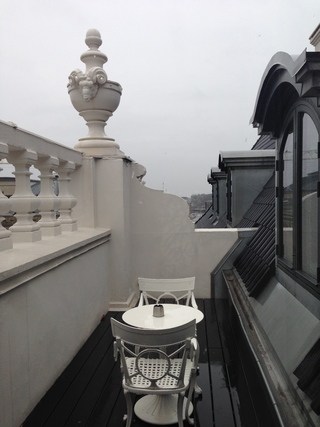 The last flower has opened on the stem,

I slipped my skin

walked off & left myself & left

feeling the first snow of the season falling

cold on my face running to catch that downtown bus leving

my life behind & abandoned my whole self, was I

my heart beating feeling my blood too feeling

Lightsey Darst's quiet revolutionary poems, THOUSANDS, are written in journal form, in a notation of private thought that rages across the page. The above poem is taken from "Minneapolis, Minnesota, 2012."  A mysterious shift of awareness powers Darst's poem. I am drawn by the element of recovery. As though the shape of some unvoiced loss has only just revealed itself. The line "I walked off & left myself & left" traces the poet's slip from the familiar into the unexpected. Chasing her bus, a first cold snow swirling in her face, Darst surroundings dissolve on a wave of raw sensation. A transformation of presence. As if tasting a bite of watermelon we remember a summer in Kansas, a particular garden bothered by horseflies and dust.

The daily self has met the deeper dreamer.

I thought of this poem today and that opening, The last flower..., noting an unmistakable mark of fall color, of rust, crimson, and dry brown, in the wilderness foliage. Trees standing silent in a stagnant haze of wildfire smoke and heat. No breeze rustles the leaves, there is no murmur of birdsong or insect life. It has been a difficult, burning summer in the Northwest. Yet the turn toward a changing season is unmistakable here. The downshift. Letting go after a fierce season of difficult growth. This transition in seasons feels equally personal. As though I, too, will turn a corner. That I will have "left myself & left," rediscovering what is lost as though new again, experience what is hidden as seen.

Autumn can be a rest or a beginning. Perhaps both.

I am ready for my heart beating feeling my blood too feeling. Aren't you?

Yes I am ready too!