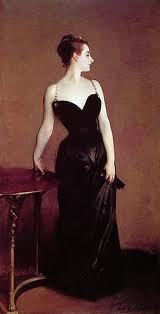 Madame X, John Sargent
A portrait is a picture with a little something wrong about the mouth...
-John Singer Sargent

I set to work this morning at my writing desk, fleshing out a mental sketch of a character observed at a classical guitar concert last night. As I toyed with the subtleties of character revealed both in the actions and inward reflection of others, I thought about the quote above credited to the prolific portraitist John Singer Sargent, a man who made his fortune studying the revealing detail. I am fascinated by Singer's infamous "Madame X," who gazes away from us from her height on the wall at the Met with such poise, with her delicate composure and dangerous smile - that little something in the averted glance, the lift of her upper lip at the innermost corner. What is she thinking, and how is it we know, strangers centuries later observing her likeness, that this, this mysterious smile, is her signature gesture? "Madame X" - Madame Pierre Gautreau - the anonymous beauty with a secret.

My character from the evening's concert was far more tame I suppose - an older man with a distinguished head of silver hair, sitting alone, holding himself militarily upright for the entire two hour performance. Not stiffly, but very still. As if all his focus were gathered in the act of listening. A glass of red wine rested on the table to the left of his elbow. More formally attired than most in attendance, he wore a parchment-colored cashmere turtleneck and dark, elegant blazer. His face, broad and deeply lined, reminded me of the countenance of a field hound, impassive as he listened. What is his story, I wondered. Widower? Perhaps alone just this night, sole afficinado of the classical guitar amongst his intimates? I could only guess, as like Singer's "Madame X," his remarkable composure invited speculation and deflected exposure. His story sealed behind the quiet pleasure in his eyes.

A character is an invitation to a story. Great characters people our surroundings with silhouettes of legends and ballads of heroics and woe. I love that the portrait, the artistic effort to capture the human spirit within a look, is most genuine in the errant detail. That little bit of something that stands apart as imperfect, unique, original. What I will remember of my character in the audience last night is the image of his pale, perfectly folded hands resting on the table. This little detail suggests the composure reflected in his genial expression mirrors the tranquility of his soul; that my elderly gentleman is perfectly folded from within to without, a spirit in order. Then again, maybe he is a former priest, trained in stillness. Or a military man, retired from the wars, holding his thoughts and pleasures to himself. A professor perhaps? A surgeon? An experienced birdwatcher, quiet in his observance. I shall never know...which is what makes the portrait a fascination. His story is in his hands.