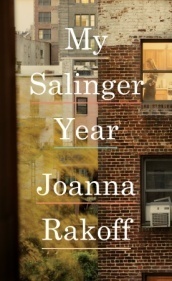 My Salinger Year by Joanna Rakoff
The worst that being an artist could do to you would be that it would make you slightly unhappy constantly.
- J. D. Salinger

MY SALINGER YEAR by the writer Joanna Rakoff (A Fortunate Age) is a curious, engaging memoir reflecting on the year the author apprenticed as a literary assistant at a venerable New York literary agency. At this respected, decidedly "old school" firm, one of Rakoff's tasks was that of answering fan mail sent to the agency addressed to their long-time client J. D. Salinger. The letters on Rakoff's desk, from fans of all ages and nationalities, became the narrative echo of her own adjustment to adulthood, the city, a difficult relationship. As she painstakingly answers each letter, as no letters are ever forwarded to Salinger (by his own edict), Rakoff begins to engage with both the author as well as his fans. For devotees of J. D. Salinger, these shared bits of "Salingeriana" as Rakoff calls them, are interesting in their own right: Salinger remains to this day one of America's enduring literary giants, and forever a mystery to his fans and critics. As she works her way through the letters Rakoff begins to treasure her handful of conversations with the reclusive writer, even assisting her boss, Salinger's devoted literary agent, on a secretive book project. But what makes MY SALINGER YEAR a satisfying read is the slow opening on the page of Rakoff's awareness of herself. This is a tale not of Salinger but the coming of age of a young woman and poet.

Rakoff's memoir is set in the New York high-rises of publishing at the cusp of the digital age. This twilight of "the genteel agency" is evoked beautifully on the page in Rakoff's confident descriptive language:
"We were girls, of course, all of us girls, emerging from the 6 Train at Fifty-First Street and walking past the Waldorf-Astoria, the Seagram Building on Park, all of us clad in variations on a theme - the neat skirt and sweater, redolent of Sylvia Plath at Smith - each element purchased by parents in some comfortable suburb, for our salaries were so low we could barely afford our rent, much less lunch... All day we sat, our legs crossed at the knee, on our swivel chairs, answering the call of our bosses, ushering in writers with the correct mixture of enthusiasm and remove, never belying the fact that we got into this business not because we wanted to fetch glasses of water for visiting writers but because we wanted to be writers ourselves..."

The heady literary spice woven through the memoir is of course J. D. Salinger's work - his beloved stories and novels. The author comes to treasure certain of Salinger's characters as they reflect back to her her own life. She is moved by the way Salinger's fans write to the author, sharing the raw, intimate, and oftentimes confused moments of their lives. She finds company in these letters and answers to her own questions as she crafts answers to theirs. MY SALINGER YEAR is finally also a love letter to literature. The way books and writers accompany us in the quotidian trenches of our uncertainties and misery; how they light the unknowable. The way we keep in our hearts that line from a story that somehow finds resonance when nothing else can.

I recommend Joanna Rakoff's memoir. I know you will enjoy its subtle splendor as greatly as I did.