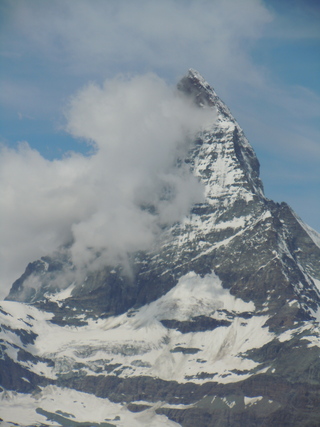 The Matterhorn, Zermatt, Switzerland
ON TURNING TEN
The whole idea of it makes me feel
like I'm coming down with something,
something worse than any stomach ache
or the headaches I get from reading in bad light -
a kind of measles of the spirit,
a mumps of the psyche,
a disfiguring chicken pox of the soul.

You tell me it is too early to be looking back,
but that is because you have forgotten
the perfect simplicity of being one
and the beautiful complexity introduced by two.
But I can lie on my bed and remember every digit.
At four I was an Arabian wizard.
I could make myself invisible
by drinking a glass of milk a certain way.
At seven I was a soldier, at nine a prince.

But now I am mostly at the window
watching the late afternoon light.
Back then it never fell so solemnly
against the side of my tree house,
and my bicycle never leaned against the garage
as it does today,
all the dark blue speed drained out of it.

This is the beginning of sadness, I say to myself,
as I walk through the universe in my sneakers.
It is time to say good-bye to my imaginary friends,
time to turn the first big number.
It seems only yesterday I used to believe
there was nothing under my skin but light.
It you cut me I would shine.
But now when I fall upon the sidewalks of life,
I skin my knees. I bleed.
- Billy Collins

I fulfilled an important bucket list item on this recent journey: I climbed high in the shadow of the iconic Matterhorn. Unintentionally, accidentally, saying yes to a dream. I set out hiking in worn tennis shoes, scrambling over rock and glaciers, heart pounding, calves spent like stretched rubber bands as the trail, or what was left of it after the snow melt, snaked relentlessly upwards toward the peak of Gornergrat at 10,610'. Granite rocks, slashed by daggered glaciers, stood erie in the clouds. It was a daunting proposition. And I did it with an eleven year old girl.

But what a child. A sweet thing with English fair skin, an aversion to heights (or, as she later clarified as we navigated a goat track of a trail high above a rock fall, "I realize it's not heights I'm afraid of, but falling"), too-small rubber water shoes, floppy beach hat, and a repertoire of musicals she could sing by heart, even as I worked harder for breath at each spike up in elevation. Her Dad, the unlikely academic scholar leading our party of three, charged up the trail, scouting the wash-outs, cliff-hangers, and waterfall fords. Unstoppable despite his "best available" footgear of suit socks and dress shoes, his daughter's colorful school pack slung over his right shoulder. We were on a mad adventure and madly underprepared - without the proper clothes, boots, hiking poles, compass, packs, emergency gear. But we had a good weather forecast, cell phones, granola bars and apples, a trail map from the hotel, sunblock, and plenty of water. Oh, and the girl had her new Swiss army knife. We were set. At one with Billy Collin's poem: In the perfect simplicity of an adventure, nothing "under the skin but light."

What began as a lark to hike the mountains to meet our group (traveling thru the Alps to the viewing station at Gornergrat by cogwheel train) ended on a triumph of will. A celebration of the midlife human spirit, and, the pure possibilities of childhood. I know this sounds grandiose and corny, but when you are 4 hours out, the Matterhorn looming pristine in the thin sunlit air, climbing steadily over broken boulder and missing trail, you power forward through those last exhausting hours on will alone. The Dad and I exchanged glances on many a cliff drop-off: As parents, questioning our uninformed foray and checking the risk against the progress made, and as adults, wondering at the inspiring unformed fortitude of our youngest member. A kind of "embrace the impossible" work ethic invaded our group as we successively navigated ever more difficult trail forks and unmarked terrain, asking in all the languages we knew of anyone we met, "Gornergrat?" The girl said, "Daddy we're going to finish this. No quitting." Edelweiss and meadow flowers kept silent company.

The last third above the tree-line, far past the last meadows, was by far the most difficult, coming as it were from spent reserves. The penultimate triumph - "penultimate" defined so personally, at that exact mark - came as we crossed the glassed, elevated viewing station through crowds of international tourists to the cheers of our anxiously waiting companions. I'd made a bucket list dream come true - me and my aching middle-aged body, in the company of childhood. And that last bit is particularly meaningful to me. I do not suppose that as yet my fair English companion really understands what she has accomplished, but I believe the impact of such an odyssey will be with her forever. Like the murmur of the sea in the lost shell, "You can do anything" will whisper in her ear. She shines.

For me, the old guard, and perhaps for her Dad as well and for this child with unbounded opportunities still before her, childhood's "dark blue speed" - what it is to live and live fearlesslly and fully - was found that day at the Matterhorn.