Emerge On The Page 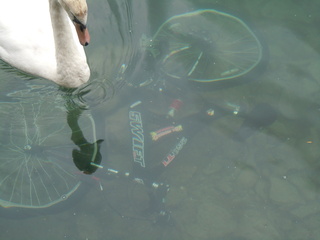 Swan on Lake Luzern, Switzerland
It requires faith in the process. The imagination has its own coherence. Our first draft will lead us. There's always time for thinking and shaping and restructuring later, after we've allowed something previously hidden to emerge on the page.
- Dani Shapiro, "Still Writing"

I put it on whenever I come in,
as he did, stamping
the snow from his boots.

I put it on and sit in the dark.
He would not have done this.
Coldness comes paring down from the monotone in the sky.

His laws were a secret.
But I remember the moment at which I knew
he was going mad inside his laws.

He was standing at the turn of the driveway when I arrived.
He had on the blue cardigan with the buttons done all the way up to the top.
Not only because it was a hot July afternoon

over the haystacks that sweep past
keep shocking him
because he is riding backwards.
- Anne Carson, from "Men In The Off Hours"

I chose these two things to share on the blog today because one quote is about the process of bringing our thoughts to the page - of trusting in the machinery of reflection and distillation - and the other a poem reflecting on the loss of the familiar from our thoughts.

Carson's poem is a beautiful example of the kind of poetry I feel lies within all of us. A cherished memory - Carson's father wearing his familiar blue cardigan - becomes a poem mourning abandonment by memory. Carson's observations open inward as if they were nesting dolls: the poem's primary theme of beloved familiarity is nested within yet another, more subtle theme of human connection. The poem begins with a simple blue cardigan, but as Carson lifts the layers of complexity in the memory she has of her father and this sweater, she reveals that within the beloved comfort of the personal keepsake is the memory of her father losing his memory. And in the process, the ties to his daughter.

Writing depends, as Dani Shapiro observes, on the pliable plasticity of memory. The ways we move within time as it exists in our minds to weave a narrative, a history. What is a line of poetry or a sentence of story but the distillation of the many "then and nows" of awareness ? When we describe an experience, examine something we have learned, we engage in a focused effort to scrap away reaction to reveal insight. We have faith our mental archive, our memory, holds the thread intact of all that was and is. When the thread begins to fray, or inexplicably breaks, we exist removed from our own narratives, lost and startled by all we do not recognize. "Riding backwards," as Carson describes her father. The shadows of time flying past us in the opposite direction.

I invite you to think of a "blue cardigan" in your life... an object that represents an embedded relationship or relationship of memories important to you. Create a mental picture, a poem, or perhaps a paragraph of memories connected to that object. What you feel is more than a memory. It is you.