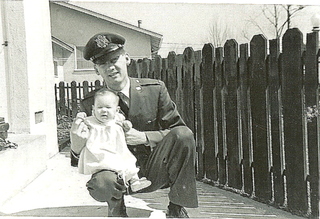 Father's Day is a national day of commemoration created by a young woman in Spokane in 1910 in honor of her father, who raised her on his own after his wife's untimely death. I spent part of the day yesterday thinking of my own father, Thomas. Dead at 45, a career AF officer and fatherless himself, having lost his own dad in combat in WWII, my dad was an introverted, scientific man. He cooked. He liked Hank Williams, he had migraines. He liked to tinker. My father worked with his hands on projects of his own design, and he liked the wilderness, he was an Eagle Scout. He never said much, but he had a gentle smile. He was a quiet, withdrawn man as he grew older. Some of that a result of the harsh life of the military service and secretive work in cryptography during the cold war. Some of that the companionship of vodka. And there was the widening gulf between my parents as we grew to be a family of six, all the while moving every other year of my childhood. The oldest, I find it comforting to think of the things he and I did together - the hikes through the national forests, the projects we worked on, his large hands patiently steadying mine. The pained moment in the car, just the two of us my senior year of high school, our family destroyed by divorce, when he turned to me and said, "You can be anything you want to be, Glenda." I am saddest that my siblings have no memories at all of him, such is the scarring destruction of life post-divorce.

And then there are my own children. Also fatherless, Ken dying of cancer in their very early preteen years. And yet their world is full of men who have come into their lives as powerful and caring mentors. Friends, music teachers, college masters, family men, military commanders, professors. When they celebrate Father's Day they feel the core of love they grew from, for their childhood had a vivid bright sun of love. There are no forgotten memories of their dad, but a roadmap to what a father's love was and can be. I see my son growing into the kind of man his father was - strong, committed, fun and compassionate. And I see my daughter wanting to love men principled and with character like her father. The legacy is different from my father to theirs, yet our memories occupy the same place in the heart.

As you think about your own father and what that legacy of love may be, remember also what it is not. What you take forward into your own family life and leave behind. What your children will learn based on their heritage of grandfathers and fathers. We are a chain of memories woven into the generations. Nurturing plaited into a rope of commitment and strength. Celebrate the love, and let time erase the rest.