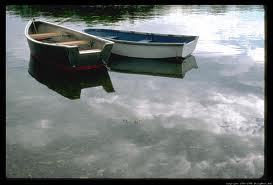 REUNION
The very best part was rowing out onto the small lake in a little boat:

James and I taking turns fishing, one fishing while the other rowed
slowly-
the long sigh of the line through the air,

and the far plunk of the hook and the sinker -
lily pads, yellow flowers

the dripping of the oars
and the knock and creak of them moving in the rusty locks.
- Marie Howe

I awoke in the middle of the night last night having a conversation with my dead husband. He and I were sitting in an open air cafe and just talking. His teeth flashed in the sun in that large, whole-body laugh of his and his eyes twinkled in amusement. And there was something else in his expression - a particular fondness, the familiarity of long love, the ease in any gathering of familiars. His smell, of tree bark and sun in the pines, and the warm pulse beneath his skin as he placed his hand over mine, pulled me from delight in his company to an awareness of detail my sleeping mind found improbable. I was startled and thrilled by the completeness of his presence, the vividness of this moment of recollection, or visitation, whichever it might be. We don't lose that fulsome sense of "the other" in the empty years after death? No matter how long the absence? I rejoiced in wonder, looking at the sun shining in his hair as he stirred his coffee. Nothing faded or implied about his presence, Ken was somehow in my life, even if only in a dream.

Thinking about all of this, I went for a run before breakfast, and as I sometimes do, found myself mentally talking to Ken. Updating him on the kids, running the questions of my life by him, and often as not, including my mother in the conversation as well, always somewhere in the background. But as I ran along the ridge of the trail overlooking the yaw of the ponderosa valley below , I abruptly stopped the rambling thoughts and asked one simple question - Are you there?

It hadn't seemed to matter before. Ken was gone physically, and the spiritual essence of our togetherness, of the man, was firmly in my heart; whatever more might be true of existence would be revealed on my own death I was certain. But our shared coffee at midnight, the slow, sensual tangibility of sitting together and talking had left me edgy, unsettled. There were things I now needed to know that I asked as I ran the dirt trail - his thoughts about my remarriage, his knowledge of the wondrous journey of our children, the uncertainties of work, the next move in my new life... If Ken was there, more present than commonly accepted, then please, I invited, come back and be my friend. How deeply I missed his light chuckle, the easy toss of head when he found something amusing or incomprehensible, the jut of his jaw when he was frustrated or determined, the warmth of his hand.

The path seemed to disappear beneath my feet as I talked and talked to the man in my head. When I came to the end of the trail and stopped, winded, I felt the answers in my body. We nest within those we have lived with, those we have loved; and these ghosts, our familiars, coil within our days and nights, just as we knew them. Vivid as our imaginations, sturdy as memory. And yet there was something more than the poetic or philosophical that settled into the aftermath of my run - concrete answers I did not expect. Questions, that now had answers. Answers that floated home from a place other than my own well-worn thinking. But like coffee in the midnight hours, nothing is certain but knowledge of experience itself.