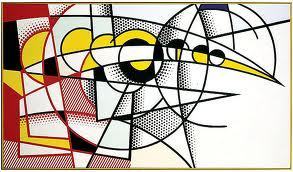 Eclipse of the Sun, Roy Lichtenstein


I found myself in Washington DC recently, at the opening of the Roy Lichtenstein Retrospective at the National Gallery of Art. A retrospective is a reflection of a range of works by a particular artist or artists. A comprehensive statement. Lichtenstein (b. October 27, 1923 – d. September 29, 1997) showed work predominantly through the 1960s in the Leo Castelli Gallery in New York alongside Andy Warhol - self-proclaimed painters of Pop Art. Lichtenstein felt Pop Art was elemental truthful representation, as the object forms the subject looking back at the world. The National Gallery's retrospective is an important, significant undertaking, occupying nearly two full floors of the East Wing. The exhibit takes the viewer through Lichtenstein's beginnings in comic book technique (romantic or combat themes), to experimentations with shading and contour dot matrixes, explorations of the boundaries of paintings themselves, stylized cartoon nudes, graphic and textural landscapes, and Picasso-esque experimental distortions in subject.

What does this have to do with reflection? The answer lies in my favorite part of the retrospective - Lichtenstein's period of what he called "perfect and imperfect" paintings - canvases in which the paintings either confined themselves to the limitations of the canvas edge, or in the case of "imperfect paintings" extended exuberantly beyond the framing, leaving an angle or line jutting outward in space. Why the idea of perfect and imperfect? To remind us, I suppose, that paintings are themselves arbitrary arrangements, and that the imperfect exists even in the arbitrary subject.

And that is worth reflecting on.

Our lives conform to arbitrary boundaries set by family, culture, even language. Yet how much of genuine, joyful, creative living splashes outside the black lines! Consider the influence of Picasso. As an homage to the artist, Lichtenstein re-interpreted several famous paintings, demonstrating the way painting and object are redefined by reflection, might still surprise, and even release new creative energy without devolving into caricature. Let's take a page from Picasso and Lichtenstein and open ourselves to the unusual and unexpected, welcome the dissonance between conformity and "imperfect" expression. We used to call that "play," back in the days before we lived and connected within the universal rules of information technology. I think we can learn spontaneity amongst other freedoms from the Pop Art generation: discover a fresh side to life we might otherwise miss in our earnest conformity.