Bookmark, The Passing of Philip Levine 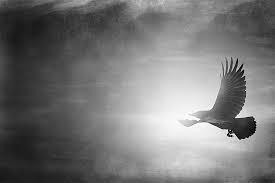 THE RETURN: ORIHUELA, 1965
for Miguel Hernandez

You come over a slight rise
in the narrow, winding road
and the white village broods
in the valley below. A breeze
silvers the cold leaves
of the olives, just as you saw
it in dreams. How many days
have you waited for this day?
Soon you must face a son grown
to manhood, a wife to old age,
the tiny sealed house of memory.
A lone crow drops into the sun,
the fields whisper their courage.

By chance does a poet become a bookmark in one's life. This small poem has a special place in my heart. Not only because "The Return: Orihuela, 1965" (THE SIMPLE TRUTH) describes hill country I know and love, but because the poet has framed a transfiguring moment - a tenuous tipping point in the human soul.

At some point in life we will each of us tilt between yearning and insufficient courage: afraid that what we remember, what we loved and left and dream to see again, must as the fates would have it, be gone. Revisiting what is memory, standing in the firmament of a dream, echoes the poignancy of that famous melancholy line, That is no country for old men, from Yeats's "Sailing to Byzantium." In "Byzantium," Yeats's observer understands his time has passed.

Whatever is begotten, born, and dies.
Caught in that sensual music all neglect
Monuments of unageing intellect.

Levine however, stands in the shoes of a man on the brink of a return. A man stepping back toward his past; who comes "over a slight rise" awash in fear, hope embedded in memory.

Philip Levine has died. Prolific, thoughtful, humble, comfortable among the ordinary - the common man celebrated in his poetry - Levine (1928-2015), bookmarked an important cornerstone in my life's eclectic reading. One of those contemporary American poets whose work remained as honest and strong throughout his life as when I first encountered WHAT WORK IS, which was honored with the National Book Award in 1991, followed by THE SIMPLE TRUTH, honored with the Pulitzer in 1994. Levine was a poet without pretense. He offered insights that did not need to be made grander than the breadth of plain truth. He gave me a language of beauty, but not false.

Philip Levine's poems, to paraphrase Yeats, stand among "the singing-masters of my soul." Perhaps we do not know these influential voices until they are silenced. At the end of "Sailing to Byzantium," Yeats reflects on the soul, It knows not what it is... Of what is past, or passing, or to come.

Philip Levine.
A lone crow drops into the sun.