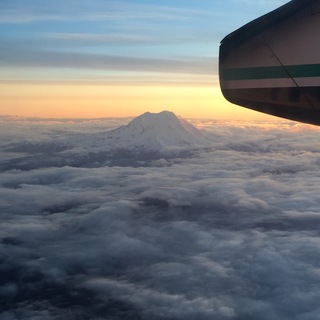 WAKING THIS MORNING DREAMLESS AFTER LONG SLEEP
by Jane Hirschfield

But with this sentence:
"Use your failures for paper."
Meaning, I understood,
the backs of failed poems, but also my life.

Whose far side I begin now to enter -

Certain words bleed through to the unwritten pages.
To call this memory offers no solace.

"Even in sleep, the heavy millstones turning."

I do not know where the words come from,
what the millstones,
where the turning may lead.

I, a woman forty-five, beginning to gray at the temples,
putting pages of ruined paper
into a basket, pulling them out again.

On our last morning at the lake this year, the unmistakable honk and beating wings of silver-bellied Canadian geese rose from the far cove. The geese were not straggled loosely, aligned casual arrows heaving across the sky as is customary, but carved in their flight close to shore. Low to the water, their V formation tipped on its side, they skimmed beyond the shore pines above the water's edge as the bats at twilight do.

And again this morning in the city I awoke to the call of geese breaking across the dawn. How is it these migrating birds infallibly mark the new crisp in the air? Do they taste the coming wet cold I have inhaled deeply on my early morning hikes? Season after season the geese know when it is time to veer southward. They keep synchronicity with mystery.

It is here: the changing of the season.

I was born in the autumn and it has always been my favorite time of year. I am partial to the slant and slow mellow gold of light, the deepening colors of the earth. But as I age, and turn over longer pages of days, and life, writing and rewriting on the backs of other days and discarded moments, I notice I've begun to tune to the subtle change of seasons. Particularly the glide from summer into autumn. Before winter.

I too, have turned from late summer into fall, and stand at the edge of winter. Each passing season, which once I believed I possessed in abundance, now feels quite precious.

I take my fill of the hours of each day. I linger. I do not rush them onward and into the next. I hold back a little. Try to draw the days and weeks and months closer. I have just begun to understand how to use this life I have been given. And I am grateful.