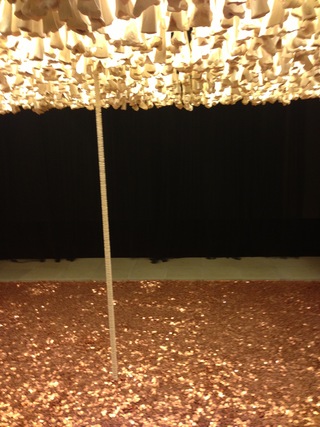 This image is of a 2013 art installation at The Blanton Museum of Art in Austin, Texas. The installation occupied (at that time) an entire room of its own. A room within a room, in which the art work, "How to Build a Cathedral," filled the entirety of the subdued space.

The light dim, the atmosphere quiet. The visitor is permitted to step inside the installation, which is curtained on four sides by filmy ceiling-to-floor black mesh curtains. Inside the closed mystery of the curtains, one may stand or walk the square perimeter of the installation upon an interior border of plain gray pavers. The ceiling within the space is constructed of a mammoth "chandelier" of cow bones suspended in uniform order from the ceiling and lit from above. The white bones funnel downward to join with a thin central cord constructed of stacked Eucharist wafers, and downward still into a sculptural seabed of shiny new copper pennies.

This art space has all of the sacramental hush and reverence we associate with the interiors of cathedrals, composed of the metaphoric elements with which we erect them. Rock. Bone and muscle. Ritual. Money. And death.

Cildo Meireles has conceived an experience for us that improbable as it would seem, is made profound by our innate human inclination and worldly cultural intention to honor what we believe to be sacred. A space for contemplation. A space constructed of the elemental world. What is sacred, born of the ordinary.

That last sentence. yes. I think maybe that's my life's central task: to find, honor, and celebrate that which is sacred, born of the ordinary. xox