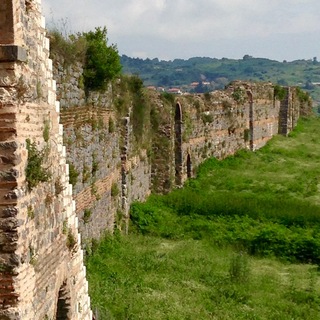 Actium, western Greece. Where Cleopatra and Marcus Antonius came in from the sea
THE NEXT TIME
BY Mark Strand

Of light upon the waters is as nothing beside the changes
Wrought therein, just as our waywardness means

Nothing against the steady pull of things over the edge.
Nobody can stop the flow, but nobody can start it either.

Time slips by; our sorrows do not turn into poems,
And what is invisible stays that way. Desire has fled,

Leaving only a trace of perfume in its wake,
And so many people we loved have gone,

And no voice comes from outer space, from the folds
Of dust and carpets of wind to tell us that this

Is the way it was meant to happen, that if we only knew
How long the ruins would last we would never complain.

There is a deep truth about this poem. The poet, Mark Stand, has taken the idea of time and its passage and said something interesting about passage. Time is both a physical and experiential transition, a flow of moments here and gone, a cosmic bookmark continuously placed anew. We think of time as dynamic. But do we also experience time as architecture, nested windows of life, sometimes a ghost? Strand envisions time as the inexorable tumble of what was into what is. That "then and now" coexist, ever so briefly, before what is is then no more. THE NEXT TIME is a poem of moments. A poem that says be now. Let go.

The last sentence of Strand's poem is particularly poignant:
It is the way it was meant to happen, that if we only knew
How long the ruins would last we would never complain.

The architecture of time is beautiful. A long and vaulted hall. A soaring, columned esplanade forever arcing into the distance. Strand writes of the pull. We cannot stop, nor begin, time's flow. Time loosens our grip even as we claim it; pries loose our fingers. We struggle, lament, and then finally abandon our monuments, let go our losses, release our loves. The ring of footsteps swallowed in silence. The culmination of expired tomorrows behind us.

Measured hours lean into the next and the next.

A trace of perfume. How long the ruins last.